Learn how video calling with customers is implemented on a wide range of industries.

Read, watch and learn everything
there is to know about 24sessions.

Learn how video calling with customers is implemented on a wide range of industries.

Read, watch and learn everything
there is to know about 24sessions.

The impact of Covid-19: How video calling with clients is growing massively

We used to say video calling with customers was the next gen channel for customer interaction - lurking right outside our doorstep, waiting to be discovered by the big majority of businesses.

Now, within a span of 8 months, video calling has become a major part of the new normal. With lockdowns, quarantines and stay-at-home policies, global measures to beat the Covid-19 pandemic have made video calls a vital means to stay connected in a post-corona world. 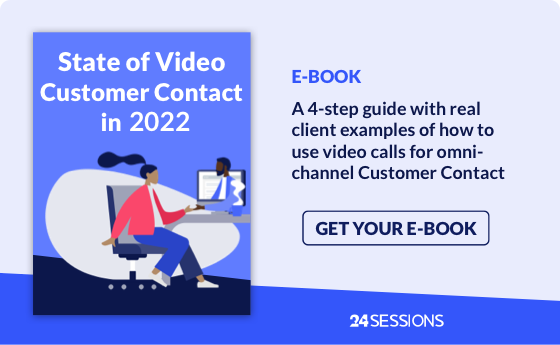 The 400% rise already says a significant lot, but it’s even more interesting to split this number up. That’s because the actual increase in CX video calls varies greatly per industry.

This blog will give you more detailed insights in the growth that CX video calling is going through at the moment as a channel for interacting with customers. We have split up our client portfolio into 4 different industries. We will show the percentage growth in the number of client video calls being made in each of these 4 industries:

Important to note: we took week 10 of March 2-6, 2020 as our starting point (0% increase). All graphs show the relative growth in percentage (%) of the number of client video calls made weekly, compared to this index.

Since the corona crisis hit, our Banking clients have massively scaled up the number of video calls they’re making with their customers.

This massive rise in video calls for mortgage advice could be attributed to a shift from face-to-face mortgage advice in branches, to video meetings. And possibly the demand for mortgage advice meetings coming from consumers increased in absolute numbers too, with existing homeowners looking to renew their mortgages for fear of quickly rising mortgage rates.

An example of how CX video calling can be added to, or replace, existing channels for customer interaction

The biggest rise in CX video calling occurred in Private Banking, with a record increase of almost +2400% at the end of April, compared to the number of video calls made in the first week of March. Private Banking is a typical example of an industry where the most important channel for interacting with clients still used to consist of face-to-face conversations. So before Covid-19, the number of video calls made weekly by our clients in Private Banking was low compared to other industries. After quarantine and social distancing measures, however, these in-person client meetings had to be replaced entirely by video calls.

Furthermore, the international stock and investment market made a historic drop from early March to March 17. This too can explain the big rise in the amount of video calls made weekly in both Private and Investment Banking. For Investment Banking, the number of client meetings via video calling spiked in the week of March 20 already with a +100% increase compared to 2 weeks earlier, and then continued to grow to a steady +500% increase through late April-early May.

Clients in B2B Account Management first experienced the opposite of the development we’ve seen in the Banking industry. Throughout March, the number of customer video calls made weekly remained more or less the same as in the pre-corona months of 2020, actually declining somewhat compared to the first week of March.

With the start of April, however, the weekly number of Account Management meetings held via video calling rose rapidly - first from a +110% increase during the week of April 10, then growing further during the end of April, to a +365% rise compared to the amount of video calls made in the week of March 2-6.

In Account Management as in Banking, the majority of client meetings before the corona outbreak, used to take place in-person. The rise of the amount of video calls made during April, then, could be attributed to the fact that many Account Management meetings had already been planned as face-to-face meetings. However, with social distancing measures going into effect, these in-person meetings with customers had to be replaced by a different channel - i.e. video calling.

Our clients in the Travel industry use video calling in a Contact Center context. As this industry is most harshly affected by the Covid-19 crisis out of all 4, the number of video calls have greatly declined and now temporarily stagnated here.

In March, however, the Travel industry first saw an increase in video calling. As national governments were slowly closing borders, international travellers had many queries about how to travel back to their home country, when to catch a last flight out of the country, or how and if they would be compensated for a canceled trip. For these queries, travellers could contact our clients via video calls.

4. Recruitment | A shift to video interviews, then the rise in hiring via video declines

The number of weekly video calls reached a record increase of +213% compared to early March during the week of April 10. This massive growth in video calling could be due to companies moving already scheduled interviews from in-person to a video call with a candidate.

In April, video calling in Recruitment has remained on the rise compared to pre-corona times, but the increase has somewhat slowed down compared to the first month of social distancing measures. One reason could be the economic consequences of the crisis making themselves clear, with many companies freezing budgets and temporarily putting hiring on hold.

Future | Video calling with clients is here to stay

The one question all these numbers of growth or decline raise: is the impact of Covid-19 on CX video calling temporary? Or is the current growth of video calling a trend that is here to stay?

At 24sessions we clearly see: video calling is here to stay. The corona crisis has only accelerated the trend toward digital customer interaction that began long ago. Some innovative companies already clearly saw the return-on-investment of video calling with their clients. They now have a transformative advantage over businesses that weren't as fast to adopt, but who are now also being forced head first into rapid digital transformation.

The economic challenges we are facing after the health crisis, along with the development of the virus and governmental measures globally, will have to show to what extent video calling will remain the new normal for customer interaction. But it's a matter of 'to what extent' - not 'if'. What is for certain is that video  calling will have its place as a mature channel for customer interaction in the future, too.

Like to see why CX video calling is here to stay? Learn about scaling up video calling for customer contact? Download our new report on the State of Video Banking 👇

Get our monthly newsletter sent straight to your inbox.